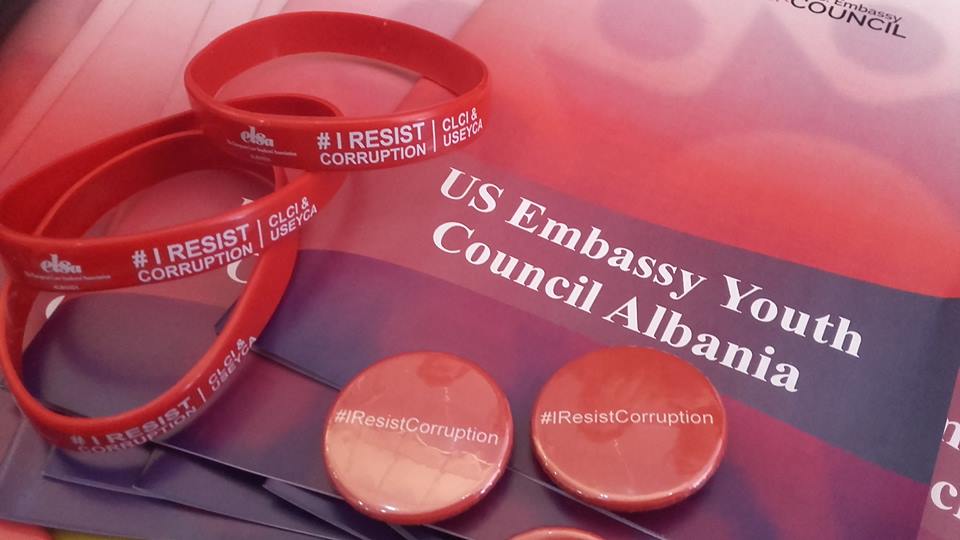 Fighting Corruption in the Higher Education system is a project financed by the Democracy Small Grant Commission, U.S. Embassy in Tirana and implemented by the U.S. Embassy Youth Council Albania and the Center for Legal and Civic Initiative.

The corruption perception in Albania is enormously high and corruption is seen as a huge obstacle in the political, economic and social development of the country. Although there are lots of strategies, legal and institutional frameworks committed in the fight against corruption, we believe that a top-down approach is not enough and cannot be effective without the bottom-up action of the citizens themselves. That is why our project is focused into fighting the corruption in a special sector such as the Higher Education system, a sector where this issue is not properly addressed yet, and has a bottom-up approach, since it will be developed and implemented by its own main target groups, students.

There is a strong need to focus on corruption in education system aiming a free corruption society. The reason why we want to focus on the issue of corruption in the Higher Education system, is not only because in the government’s policies against corruption this sector is left behind- compared with the judiciary, healthcare system or other public services- but also because we see this sector as highly sensitive. The corruption in the higher education system is especially dangerous for the mere fact that the fist victims here are the young people. If the system of education leaves loopholes for the use of corruptive means to achieve successful results, the message that the system of education will leave would foster the corruption in the society even more; students that are involved in corruptive behavior during their studies will likely involve into corruptive affairs in the future. This will not only damage the students’ integrity, but will give lea way to unethical and dishonest behaviors and create an environment of disillusionment and lack of trust into the institutions. In long term, this will not only affect the higher education system, but the whole society in general.

All the activities against corruption will be student centered, since students will the both the target group and the main developers and implementer of this project. The reason why the project has this approach is because we believe that corruption is first of all a behavior and if we want to fight it we should start by a personal commitment to resist this conduct. Students should first be aware of the negative effects of the corruption in the education, economy and society and understand that they can play an active role in this fight. Students are an important part of the higher education institutions and they should comprehend their rights and responsibilities to keep these institutions “clean”. For this reason the project will encourage a “ I Resist Corruption” campaign, where students not only will take commitments not to engage into corruptive behavior, but will also work out creative solutions to address the corruption in their Faculties and to develop platforms and tools to prevent it or make people accountable about it. Through the Anti-Corruption Club’s activities in different Faculties, we will support students to denounce corruption, share their stories, as well as work into groups to find the best solutions to tackle the corruption problems in their Faculties. Moreover, through a public exhibition event and the active use of social media, we aim to generate a domino effect and create the ambit for a sustainable youth movement against corruption in the future.

This project will seek to increase transparency and accountability in the higher education system. We believe that the roots of corruption are lack of transparency and accountability. Therefore the best way to prevent and fight corruption in the higher education system is to have institutions with accessible, simple and transparent procedures to allow the students and other stakeholders to monitor the system and sanction the abuse of power. This project will inform students on the existing procedures and mechanisms that prevent corruption and abuse of power in their Faculties as well encourage the creation of new procedures and mechanisms to fight the corruption therein through monitoring and reporting. We need to install to the young people the hopes that corruption can be challenged and that transparent and accountable governance is a common good for which all should engage and commit, starting by the place they study, to go then in the place they work and live.

This project will seek to use education as a weapon in the fight against corruption. Instead of having an education system that just equip individuals with knowledge, skills and diplomas, we should also aim to transform universities into places were individuals are trained with anti-corruption, ethical and impartial behavior. Through the activities in this project we want to reassess that integrity, transparency, competence and accountability are values in a democratic society and these values should be protected and promoted. Moreover, a component of this project is to encourage the Faculties to incorporate a special anti-corruption curriculum in their course of studies.

Let’s work together for free-corruption Universities!