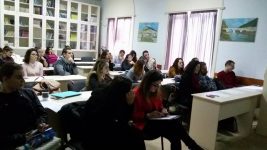 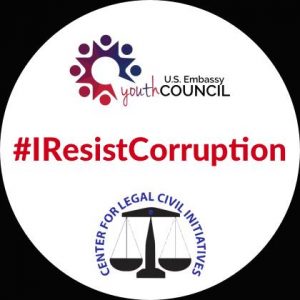 One of the faculties in which were organized meetings with students to get acquainted more closely with their problems was the Faculty of History and Philology. In this faculty were organized two meetings, respectively on 28 June and 10 November 2016. The interval between these meetings proved to be sufficient to reflect and to give effective and necessary strategies by creating an intolerant attitude Corruption in Higher Education.

In these two meetings were invited honorable academics and journalists, who have consistently shown a critical and thinking by opposing Corruption in the Higher Education. The meetings were held respectively in three sessions in which guests, students, representatives of the Youth Council and all parties revealed problems and cases of corruption in the higher education system, presented strategies and alternative ideas to minimize these cases, which are worsening the system day by day.

Part of the first meeting organized at the Faculty of History and Philology were the honored professors Mark Marku, Artan Fuga and Ervin Goci. Faced with their students, each of the professors expressed their thoughts and perceptions toward the higher education system as a whole, the spaces created by the system to develop further corruption and also mentioning their alternatives to an improved system. This system should create more opportunities for an active role in decision making, directly related to the learning process and the interests of students, who must be able to choose their own course of studies. This should become the main element around which is created a climate that benefits and is in accordance with the students interests and also is closely related to the goals and objectives of the university as the institution in which students in collaboration with the academic staff and not only can reach their respective professional fields.

In the second part of the meeting the protagonists were the students who in collaboration with members of the Youth Council presented part of the Statute of the University of Tirana, the Law on Higher Education and the internal Regulation of the faculty as the basic documents on which is reflected their role as students. In this productive discussion, students did not miss the chance to give their ideas to enhance their role not only in the legal basis mentioned above but also in the everyday reality of which they are an essential part of.

Students expressed the concern of the lack of functioning of the Faculty Student Council as the main structure representing their interests and needs. The possibility and necessity of an Ethical Council of the Faculty of them was one of the requirements articulated by the students.

In the last part of the first meeting President of the Youth Council Fjoralba Caka, saw the involvement of students in the discussion, who expressed their problems and offered them the opportunities for involvement as volunteers in this project not only in their faculty but also the other faculties in which the project is extended. Conversation continued further during the break. The professors who were invited to this meeting also expressed their support in this project, not only for the organizing staff, but also for students who during their daily lives encounter corruption behavior. By being part of the media world, the responsibility to deal with corruption was significantly higher, as expressed by the students.

In the first part of the second meeting organized at the Faculty of History and Philology was discussed the role of investigative journalism and corruption in the higher education system. This session was chaired by Fatjona Mejdini, investigative journalist at BIRN. During her conversation with the students of this faculty, Fatjona brought to the students some encouraging cases of investigative journalism to emphasize trough their courage, the necessity and the attitude that should hold every student who is faced with the phenomenon of corruption in each institution they are part of and to enhance the integrity, quality and trust in the higher education system in particular.

In the discussions it was also emphasized the responsibility among young people to become part of the fight against corruption without fear and with confidence that they are the hope, means, manner, purpose and answer to why we should take a stand against corruption.

In the second part of this second meeting, the participant students expressed each a problem and at the same time an alternative solution to the given problem. They also addressed the cases of corruption in other countries among which were mentioned several cases of corruption in India, Cambodia, Hungary, etc., by trying to create a parallelism to Albania. Part of the discussion was also a citizen of Mexico, who discussed and brought corruption cases in Mexico and India, the country where he had lived for some time. Unfortunately the differences between these realities were minimal.

Although corruption is unfortunately a phenomenon on the rise in our educational system, as long as there are still students, academic staff and other influential stakeholders in the academic life with the desire to contribute with ideas, work and their commitment to create a skilled generation of professionals, this challenge is not impossible to win.  Knowledge is undoubtedly the strongest and right tool to create a worthy university environment.

During the meetings organized at the Faculty of History and Philology by the Youth Council, the main characteristic noticed was the friendly environment, both correct and informative created in the Department of Journalism, where not only teachers, but also students expressed a serious attitude towards corruption as a phenomenon which was not present in their everyday life of faculty. This is truly a value created in this department, which has served as a motivation for students in other departments and faculties. Through this example it is very clear that corruption doesn’t turn into a gangrene which spreads day by day if we do not become part of this phenomenon. To bribe or corrupt can be an easy and quick way to achieve something, but different time and situations have shown the opposite. If you believe that you are really capable enough to achieve something, try to achieve it without corruption, try to achieve it with professionalism and dedication. Corruption is the tool of the weak, coward and incompetent.

You can follow these activities on Facabook: U.S. Embassy Youth Council Albania and I Resist Corruption FHF.