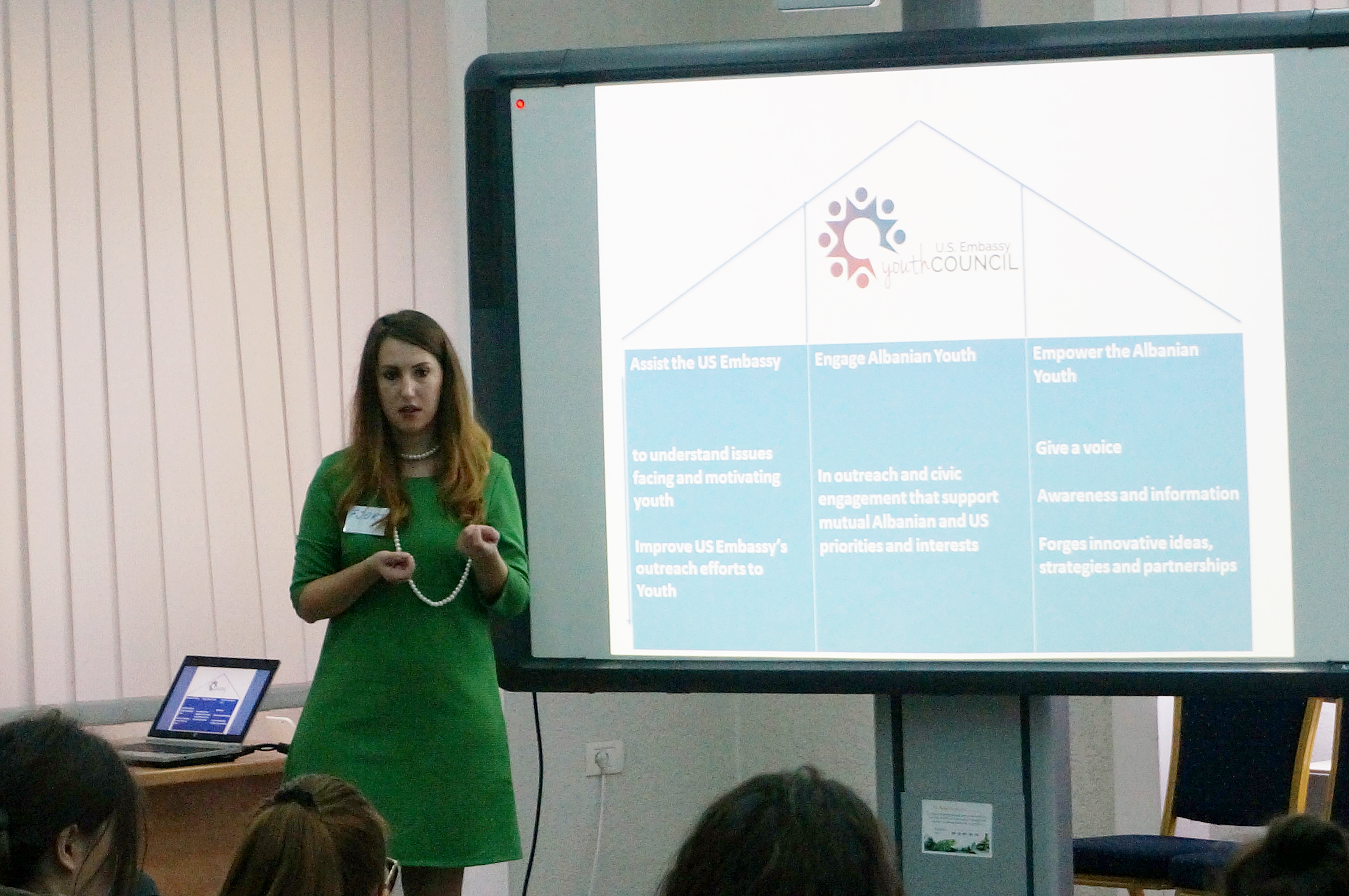 Several months before 9th January, I had conceived a special structure of how the Council would work and one of the basic ideas was that the structure should serve three main functions: the development of the independence of leadership; competence; and integrity of youth in Albania. For this reason, young people would be grouped according to their will and skills in one of the Youth Council departments and each department would have a leader. This would give some of the youngsters their first experience of running a particular field, but the other members of the department would also learn the process of group work, networking and funding, communication with other departments, as well as writing and implementing projects. The board also consisted of young people who in cooperation with the departments set common objectives and then work to realize them. This would be an organization with young people and for young people which would not only carry out activities but above all would serve as an incubator where these young people would grow their skills, teamwork and leadership. It was precisely the concept of the Youth Council as a space where young people could feel free to realize their ideas, take initiatives, cooperate, and bring external innovation that made this organization different from others (except the name).

It was certain that the explanation that the Council would belong to the youth and that they would be the ones who would guide it was not believable by all. This appeared in the first months, where some members were somewhat disappointed that the Embassy representatives were not giving them any orders or instructions on what to do and the absences of these “directives” by the Embassy made many members confused. Guidance without instructions was not easy for everyone, and there were also those members who dropped out of this initiative. Although the selected young people may have had previous experiences, taking initiatives, gathering young people in groups, sharing ideas and implementing them were challenges for all of us. For every new leader there was the pressure to build his original direction model. We had not knitted a “jacket” and built offices where young people could come and lead. Everyone who wanted to lead would do everything by himself. We did not want to have a perfect youth leadership organization, but rather youth who would refine the art of leadership through hardships and failures. And this could have only been achieved by leaving these young people the space and independence of organization and direction.

However, the Youth Council would not be run on chaos. We had a Statute (Regulation) and developed the rules for the functioning of the Departments as well as an Ethics Code with all the rules and ethical principles of the organization. For the well-administrating work we also prepared monthly reports where the board was coordinated with departments, as well as monthly meetings for all the departments’ members so that these units would not remain “isolated” in their own activities.

From an organization that only had a name on a paper, these young people gradually began to give it a shape and structure and somewhere faster, somewhat slower they began to upgrade and function. As anything rising from nothing, they faced many challenges, but challenges are those that shape characters, develop skills, patience and co-operation with one another.

As a President of the Youth Council I had the privilege of enjoying friendship, creativity, hard work, the desire to learn and the readiness of these young people to improve themselves and the environment they live in. I was pleased to have seen young people coming out of their comfort zone, taking initiatives, organizing and conducting their own activities without previous managerial experience.

As a first year I am happy that the Youth Council, although still on its first steps, has been able to reach other young people with the activities that have been organized. Anti-Corruption in Higher Education activities, successful Youth Talks meetings, opening the First Nature Library, the Identity and Cultural Heritage Campaign etc., have been some of the youth initiatives that have been embraced by many other young people.

All of these, despite the failures or the list of things that we could have done better, make me feel hopeful that my country’s youth has all the potential to be a strong actor of development and a positive influence.

Very soon the Council will have a new President and Board, who will bring forward even more strongly what was planted with love, work and insistence in this first year. What we need is to have as many independent, competent young people with integrity who want to increase themselves and do good to the community and we wish that the U.S. Embassy Youth Council can serve as a space where these qualities develop.